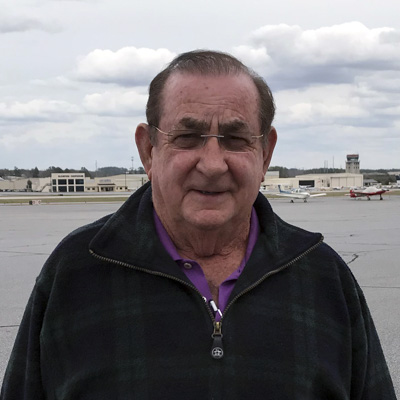 Born in 1942, Larry Brantley Thompson grew up in Cobb County, Georgia. He developed an interest in aviation as a child and started flying lessons at 12. Thompson flew his first solo flight at 16 and obtained a private flying license on his 17th birthday and a commercial flying license on his 18th birthday. As a teenager Thompson worked at McCollum Field (now Cobb County International Airport) doing a variety of jobs including shuttling passengers to and from Atlanta Municipal Airport (now Hartsfield-Jackson Atlanta International Airport). He studied Aeronautical Engineering at Georgia Tech before leaving school to become a pilot at United Airlines. He was an officer in the United States Army and served as a Nuclear Weapons Tactics and Deployment Expert. Thompson later pursued a career in real estate development and used his skill and interest in flying to become successful in the business. He has flown many notable people including Margaret Thatcher, Newt Gingrich, and Paul Newman. He maintains a strong connection to the Cobb County International Airport and has witnessed its growth from its one-building beginning to a bustling international airport. Thompson's collection includes his oral history interview conducted in March 2020 as well as materials, including documents and photographs, relating to Cobb County International Airport's development in the 1960s.