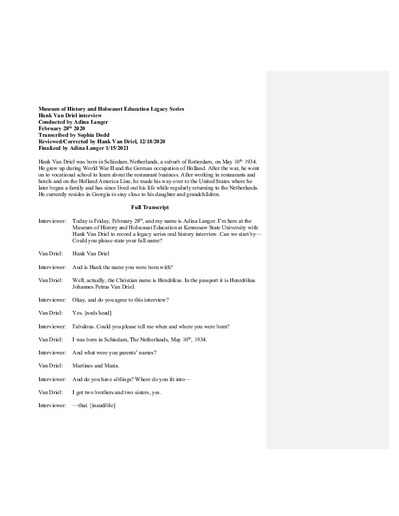 Born in Schiedam in 1934, Hank Van Driel was celebrating his sixth birthday when the Nazis marched into the Netherlands. He and his family endured five years of hardship and near-starvation rations during the German occupation. After the war, Van Driel studied to become a chef and worked at hotels and restaurants in Rotterdam, eventually landing a job on the Holland America line of cruise ships in 1962. Attracted by steady work in the American resort industry, Van Driel immigrated to the United States in 1964. He has remained a citizen of the Netherlands and travels frequently between the countries. Hank Van Driel recorded his Legacy Series oral history interview at the Museum of History and Holocaust Education on February 28, 2020.