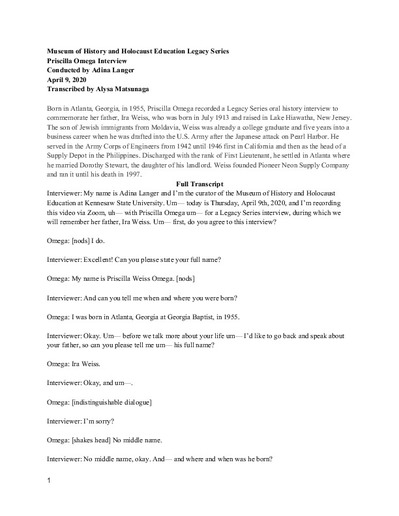 Born in Atlanta, Georgia, in 1955, Priscilla Omega recorded a Legacy Series oral history interview to commemorate her father, Ira Weiss, who was born in July 1913 and raised in Lake Hiawatha, New Jersey. The son of Jewish immigrants from Moldavia, Weiss was already a college graduate and five years into a business career when he was drafted into the U.S. Army after the Japanese attack on Pearl Harbor. He served in the Army Corps of Engineers from 1942 until 1946 first in California and then as the head of a Supply Depot in the Philippines. Discharged with the rank of First Lieutenant, he settled in Atlanta where he married Dorothy Stewart, the daughter of his landlord. Weiss founded Pioneer Neon Supply Company and ran it until his death in 1997.