Sullivan Ruff, Jr.
JavaScript is disabled for your browser. Some features of this site may not work without it. 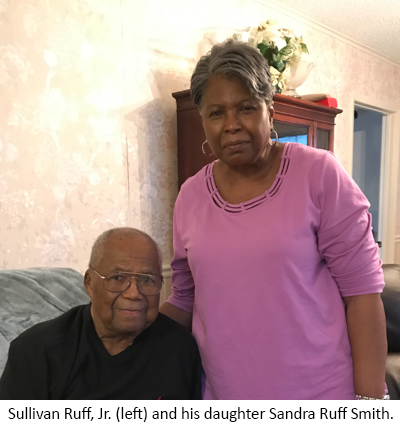 Born in 1923, Sullivan Ruff, Jr. grew up the youngest of eleven children in Union, South Carolina. He was in his second year at Allen University in Columbia, South Carolina, when he was drafted into the United States Army during World War II and served over fifteen months in Indian and Burma. After the war he completed his Bachelor of Science degree and eventually earned two master’s degrees from Atlanta University, in education administration and chemistry. After first teaching at Emmett Scott High School in Rock Hill, South Carolina, Ruff took a position teaching chemistry at Lemon Street High School in Marietta, Georgia. He later served as principal of the high school and managed its successful accreditation effort with the Southern Association of Colleges and Schools in the early 1960s. In 1966 Ruff took a position with Atlas Chemical in Chattanooga, Tennessee, where the company produced explosives for the Vietnam War. Ruff later served as principal of Howard High School in Chattanooga. He passed away in April 2020.

Listen to the audio recording of his oral history interview.

The digital reproductions on this site are provided for research consultation and scholarly purposes only. Copyright is retained by the authors of items as stipulated by United States copyright law. To request permission to publish, reproduce, publicly display, broadcast, or distribute this material in any format outside of fair use please contact the Kennesaw State University Archives and/or copyright holder.