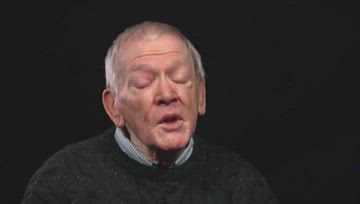 Palmer Wells was born in Keokee, Virginia in 1937 and later moved with his family to Cumberland, Kentucky. He attended Berea College and graduated from the University of Kentucky with a degree in Journalism. During his service in the U.S. Army in the 1960s, he served as editor for the Fort McNair newspaper in Washington, D.C. After leaving the Army, he worked in journalism and later for IBM, where he met his partner Michael Horne. Wells co-founded the Theatre on the Square in Marietta, Georgia with Michael Horne in 1982 and served as its managing director until its closure in 2012. In this interview, Wells discusses his early life and career, relationship with Michael Horne, and the establishment of the Theatre on the Square in Marietta and its productions of the 1980s and 1990s, including the controversy surrounding their 1993 production of Lips Together, Teeth Apart.

The digital reproductions on this site are provided for research consultation and scholarly purposes only. To request permission to publish, reproduce, publicly display, broadcast, or distribute this material in any format outside of fair use please contact the Kennesaw State University Archives.