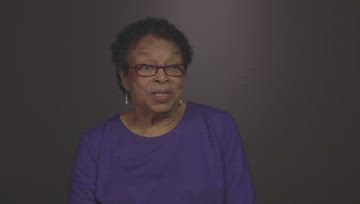 Dr. Roslyn Pope is a civil and human rights activist and educator. Dr. Pope was born and raised in Atlanta. She graduated from Spelman College in 1960, with a major in music and minors in French and English. She was President of the Student Government Association at Spelman. After graduation, she earned a master’s and a doctorate, spending her professional career as a professor and scholar. Dr. Pope is credited for crafting, along with Julian Bond, the first draft of An Appeal for Human Rights, which appeared in The Atlanta Constitution, The Atlanta Journal, and The Atlanta Daily World in March 1960. Fellow members of the Atlanta Student Movement and student government leaders at their respective colleges signed alongside Dr. Pope, including: Marion Bennett (ITC); Don Clark (Morehouse); James Felder (Clark); Willie Mays (Atlanta University); and Mary Ann Smith (Morris Brown). The publication was so powerful that the New York Times, The Nation Magazine, and The Harvard Crimson also ran it, and the document was read into the congressional record that year. Her words, “We do not intend to wait placidly for those rights which are already legally and morally ours to be meted out to us one at a time,” served as a guiding principle for the Atlanta Student Movement the Coalition on the Appeal for Human Rights (COAHR), and for the Atlanta chapter of the Student Non-violent Coordinating Committee (SNCC). Even in the 21st century, the Appeal continues to help shape the goals and strategies of a new generation of student activists throughout America and the world.

The digital reproductions on this site are provided for research consultation and educational purposes. To request permission to publish, reproduce, publicly display, broadcast, or distribute this material in any format outside of fair use, please contact the Kennesaw State University Archives.